…And on the fifth and sixth days, God created dragons

Are you sitting comfortably? Good, then we’ll begin. 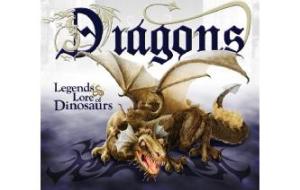 In today’s lesson we’ll be discussing a wondrous book from the fine folks at Answers in Genesis. It’s Dragons: Legends & Lore of Dinosaurs, by Bodie Hodge, son-in-law of Ken Ham, and Laura Welch, with illustrations by Bill Looney, published by Master Books in the year of our Lord, 2011. Actually, now that I look more closely, I see that it wasn’t written by Hodge and Welch. Indeed, it wasn’t written at all. Rather, it was “compiled and edited” by Hodge and Welch. Was it divinely inspired? Divinely regurgitated? Just plain regurgitated from Answers in Genesis? It certainly wasn’t intelligently designed.

Actually, that’s a bit unfair: the illustrations are impressive, and there are many foldouts, little booklets and envelopes and Advent calendar-like windows to open. It looks like a fun kids’ book, like Dragonology: The Complete Book of Dragons or The Dinosaur Museum: An Unforgettable, Interactive Virtual Tour through Dinosaur History. The only minor problem with Dragons: Legends and Lore of Dinosaurs is its content.

Here is the basic argument, as I understand it: many cultures have dragon stories; therefore, there must be some truth in these stories. Many depictions and descriptions of dragons more or less resemble various dinosaurs. Sort of. Except for the bits that don’t really fit, but those can be dismissed. Thus, evolution is wrong.

It’s outrageous that impressionable children should be exposed to such drivel. The appalling grammar could have a devastating effect on them.

Oh, the science is kind of weak, too. And the history. And the authors’ grasp on mythology, folklore, theology, logic and literature is pretty shaky. But, my God, the grammar! I mean, how hard is it to write coherent, grammatically correct sentences in a 24-page picture book (and page 1 is the publication/copyright page)? If I were to share every inelegant sentence, I’d have to re-type the whole book, and that would be a violation of copyright. Also, I suspect my brain would try to escape. So, I’ll only be able to give you a brief sampling.

The authors preface their work by advising readers to

Begin at the place where truth has been shrouded by blind science and fact has been silenced for foolish mysticism and magic. Equip yourself with faith as your shield and logic as your sword. (p. 2)

Damn you, truth-shrouding blind science! Fortunately, the authors’ shield is strong. Their sword, however, is a limp clump of rusted metal. They note that there are many variations in the stories of dragons:

The challenges in deciphering these encounters is [sic] to separate possible fact from obvious fiction, taking into account clues found in the original translations of these events. (p. 2)

Another challenge are to make your subject and verb agree. But, as they say, it is always very important to go back to “original translations.” And what will you find in these works?

…terrifying creatures [that] were give [sic] names like Abraxas, Fafnir, Grendel, Brinsop, and Manasa. (p. 2)

Yes, they said “Grendel.” Yes, Grendel from Beowulf. Yes, they said that he’s a dragon. Indeed, in an insert dedicated to Beowulf, they say,

An ancient Anglo-Saxon account of the heroic Beowulf has him slaying fierce dragons that are plaguing the King of Dane [sic]. One dragon was named Grendel, and Beowulf kills both Grendel and its mother, another dragon. (p. 19)

Young Earth Creationists have an infuriating interest in Beowulf, but that’s a rant for another time and place. For now, I’ll just offer this:

Lo, we have heard in the days of yore of the folly of the Creationists, of the book-believers, how they made Grendel, man-shaped destroyer of the Danes, into a dragon, a dinosaur of old. That was bad scholarship.–from the Original Translation

Another place where we can find dragons is the flag of Wales. The red dragon (depicted on the flag) fought an invading white dragon:

Fearing destruction would continue, the dragons were tricked and captured while they slept, then imprisoned beneath the earth for centuries. (Insert p. 4)

Dear Mr. Hodge and Ms. Welch: It is not necessary to dangle every participle. Yours very sincerely, The English language.

There are also dragons in Peru:

Whether the ancient Nasca, Moche, or later Incan nation, Peru is known for dragons and many other pieces of art that illuminate dragons. (p. 5)

That sentence is so pain-inducing, I don’t even know what to say about it.  But never mind, to illustrate their point, the authors include pictures from “a couple of authentic Peruvian replicas.” Just in case you thought “original translations” was an anomaly, they offer up “authentic replicas.” In YEC world, up is down, translations are originals, replicas are authentic, and science works to obscure truth.

In a helpful, educational section, the authors provide the names used for dragons in various languages, including…wait for it… 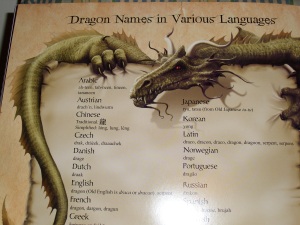 Austrian! AUSTRIAN! And no, in case you’re wondering, German is not mentioned.

I could go on, but I’m getting dizzy and queasy. The most terrifying thing about the book is the overwhelmingly positive customer reviews on Amazon. This one is typical:

This is actually a very interesting and fun to read book. despite the biased opinions of those who cling desperatley to their faith in evolution this book was not written by “nuts” but rather studied professors and scientists who have spent years reaserching the topic. I found the book was interesting however not for my younger son of two years but my older son of 4 found it fasinating. And it will not lead to an incorrect conception of science but a more wide view of human history and maybe even a greater imagination. This is a fantastic book. I highly recomend it. It even surprised me how big it was. I was expecting something a bit smaller but it turned out to be a much bigger book with very big nicely drawn pictures.

I don’t know where the author got the idea that Hodge and Welch are “studied professors and scientists,” but I can understand why he or she was impressed with the quality of the book’s writing.

To end on a more cheerful note, here is an actual genius’s take on the evolution of the dragon: 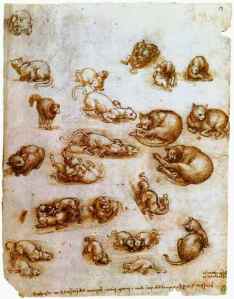 This entry was posted on Monday, October 3rd, 2011 at 12:59 pm and is filed under history, language/linguistics, literature, theology. You can follow any responses to this entry through the RSS 2.0 feed. You can leave a response, or trackback from your own site.

12 Responses to …And on the fifth and sixth days, God created dragons