Stormtroopers Reminisce about the Day the Death Star Exploded

An oldie but a goody sent to me by one of my students.

David Mitchell on the Burden of Proof

His is the only youtube channel to which I subscribe, by the way. Unfortunate how he used the word “skeptic” when he meant “denier,” but that’s my personal beef.

Also, new rule. If  you laugh, you need to give a donation to the NCSE. They recently took up climate science as one of their interests. Also, Eugenie Scott is awesome, an educator of truly epic proportions.

A clear example of Illuminati mind control extending to other species is this image of a lemur: 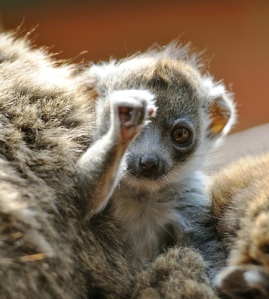 This is what Vigilant Citizen does all day.

But I’m not satisfied with that. It needs something else… 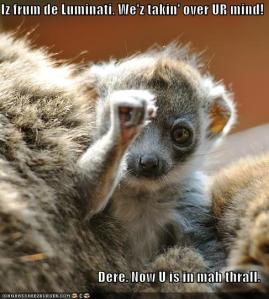 My guitar makes noises that make me happy

That, my friends, is something that I recorded with my new guitar. Now that I have reached guitar gear Nirvana/Valhalla/Candyland/Playboy Mansion, what with my Gibson, Rickenbacker, Vox AC30, Keeley Modded Tube Screamer 9, and Korg A3 signal processor, and with a little help from GarageBand on my new Mac, I can record things that only I would ever want to hear.

The backing, non-guitar track was downloaded –oh, years ago–from the web. There are live soundboard bootlegs that take out the original guitar, but, you know, I had this.

This’ll only be up for a little bit. I just wanted to hear what my new Rickenbacker sounded like. Also, I needed to de-stressificate tonight and this seemed healthier than most other options. About 30 seconds in, you can hear me stop to do some adjusting. It didn’t work. Meh.

From our foreign correspondent…

…the Blessed Professor Acker, who is currently in England. Hopefully he’s looting something nice for us. Oh, also that he remembers to steal an adapter since the plugs are different over there. He apparently picked up an Annunciation for himself:

I was flipping through a website, “Happy Place,” that collects photos of amusing signs/graffiti, etc., and I came across a photo I took! It’s the Walk This Way/Talk This Way sign that was on Georgia Tech’s campus about 2 months ago! Haha!

I’m so proud of me. That site, by the way, will suck away all of your time and life and before you know it you will be dead, so be careful. Heheh.

One of my favorite British comedy series unsurprisingly featured Hugh Laurie and Stephen Fry. Their A Bit of Fry and Laurie is a refreshingly intelligent sketch comedy show from the 1990s that took a special delight in wordplay. Here they riff on It’s a Wonderful Life to show what Britain would have looked like if Rupert Murdoch had never been born.

Of course, Hugh Laurie’s show, House, is on Fox.

Go the Fuck to Sleep

I’m using children’s books to teach visual design in my classes these days.

Or, if that is not to your liking, how about Samuel L. Jackson’s rendition:

TAM Happens in Vegas, But I Won’t Leave It There

This week I’ll be attending The Amaz!ng Meeting 9 (TAM9) in Las Vegas, Nevada. TAM9 is the annual conference of The James Randi Educational Foundation (JREF) that brings together skeptics and critical thinkers for several days of talks, panels and myriad activities. Each year TAM gets bigger and bigger whilst expanding content, diversity and attendance.

This year’s schedule contains two keynote addresses that are open to the general public. The first is given by Neil deGrasse Tyson, host of Nova ScienceNow and director of the Hayden Planetarium at the American Museum of Natural History. Dr. Tyson brings a passion for astrophysics and a strong, persuasive message of the necessity for science education and communication to the general public. The second keynote is Richard Dawkins, evolutionary biologist, prolific bestselling author and director of the Richard Dawkins Foundation. Dawkins is a foremost speaker on the importance of evidence-based thought in science and public life. He has the distinction of being perhaps the world’s best known public atheist.

The rest of the TAM9 schedule is the most varied and diverse yet. Included are artists, poets, scientists, activists, journalists and television personalities. The full schedule is here. The program covers immense ground in critical thinking, from Phil Plait to Jennifer Michael Hecht to Carol Tavris to Sarah Mayhew to Bill Nye to Adam Savage to Elizabeth Loftus to Skepchick bloggers to the hosts of MonsterTalk, and many, many more. The schedule is full and appeals to a wide variety of skeptics, not just serious scientists and intense science enthusiasts. This program emphasizes critical thinking for people across disciplines.

Beyond the official TAM program, there’s a full slate of fringe events which emphasize the diversity that TAM represents this year. Side trips are planned to Red Rocks and the Grand Canyon as well as daredevil activities. There are meetups for myriad subgroups, including various nationalities, vegetarians, LGBT folks and others. The most notorious of the unofficial events is Penn Jillette’s Bacon and Donut Party, which is a fundraiser for JREF.

The diversity of the official and non-official schedules of TAM9 elucidates the changing face of skepticism. No longer are cries of the skeptical movement as a bastion of privileged white men accurate or productive. This year’s Amaz!ng Meeting holds promise to be one that moves beyond talk of inclusion into one of outreach.

TAM9 will be held at the South Point Hotel, Casino and Spa from July 14-17. I will be posting daily blog updates from Las Vegas throughout the conference. If you have any particular questions for interviewees or issues you’d like me to address, please leave me a comment here or through Twitter.

This entry is cross-posted at SheThought.

I’m not going to TAM, but I’m going to have fun anyway!

While I can’t attend the skeptical hajj (which every skeptic must attend at least once in their life!), Eve is taking me to see Tim Minchin, who is performing in Atlanta during TAMapalooza. Tim will be playing at Center Stage Atlanta, the 1100 seat theater where TruthCon was held.  In celebration of the event, I am going to post the first version of “Storm” that I encountered. (You’ll have to visit his channel to see the excellent version that was released this year.) The narrator of Storm would have locked Center Stage’s doors from the outside and set the place on fire, laughing and sobbing all the way.