I’ve always wondered about the Cottingley Fairy hoax. European spiritualism and fairy folk are a little out of my realm of expertise, but what the heck, let’s give it a go. In some ways, I suppose, the stage was set for the Cottingley Fairies by Romanticism, which celebrated the common man and elevated his culture. This, in turn, led to a reappraisal of national folk traditions in Europe in the 19th century, as seen in the collection and study of folk tales by Anglo-Irish literary luminaries Lady Gregory and Jane Wilde, who was Oscar Wilde’s mother and gathered and published a collection of Irish fairy lore in 1888. This just happens to be the same period that manufactured gnomes (or gartenzwerge) were appearing in German gardens and becoming popular in Europe. Do with that factoid as you will.

If you aren’t familiar with the Cottingley Fairy story, in 1917, two girls, 9-year old Frances Griffiths and her 16-year old cousin, Elsie Wright, presented photographic evidence that they had been cavorting with fairies in the woods behind Elsie’s house in Yorkshire. 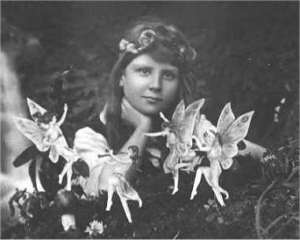 A second series of photos appeared in 1920, the year that Sir Arthur Conan Doyle published a credulous article about them in The Strand, brought the number of fairy photos to 5. But one photo is iconic, the image of Frances sitting in a glen with 4 fairies dancing around her as she gazes off into the distance. In reality, the fairies were copies of images from a popular children’s book, Princess Mary’s Gift Book, held up up with hatpins. The girls admitted this in the 1980s. But as often is the case with claims of the extraordinary the hoax itself is not so interesting, rather it’s the fact that people actually believed this stuff. One of the biggest questions, and the one that has always interested me, is how did someone like Sir Arthur Conan Doyle, who wrote one of the most analytical, forensically minded characters in literary history, Sherlock Freaking Holmes, come to believe that these fairies were real.

However, I think that the idea that an author must share personal characteristics with their literary inventions–and the corollary belief that all fiction is somehow autobiographical– is one that often leads people to strange, insupportable conclusions. I can think of no better example of this than the notion that the key to Shakespeare’s “real” identity is somehow hidden in the plays or in the sonnets. That somehow in order to write about the nobility that one needs to have been a noble, or that to write about Italy, one would need to have travelled to Italy, or that to write a series of sonnets that one has to have had one’s own real-life dark lady and a pretty pool boy. I think that there is a tendency to think about Conan Doyle in terms of his creation Sherlock Holmes, who it is admitted by all other characters in the novels as a universal genius. People think that any mind that could create a character as clever as Sherlock Holmes must be at least as shrewd. (Honestly, if you look more closely, you realize that Holmes, much like Hannibal Lector, is simply given knowledge by his author that he otherwise could not possibly know.)

The book that came out of Conan Doyle’s exposure to the Cottingley Fairies, 1921’s The Coming of the Fairies, is, in a word, a hot mess. It’s a quick read–one night should do it for you. The book is really a collection of writings, letters, testimonials, and previously published articles about fairy folk, with special attention to the photos taken by Frances and Elsie. Despite the pretense in his introduction that he’s just laying the facts on the table for analysis, you can tell, Conan Doyle is a true believer. Throughout, when he quotes someone raising a reasonable objection, you can see Conan Doyle inventing reasons to dismiss them. But there are a couple of historical particulars that make the telling of the fairy story really interesting, especially with respect to the types of special pleading that the believers came up as well as the unstated assumptions about childhood and class that are especially jarring to the modern ear.

For instance, it seems likely that Conan Doyle harbored a highly romanticized idea of childhood that may have blinded him to the possibility that the two girls were not being completely honest. It is the very purity and innocence of children, by some mechanism as of yet unknown, that allowed the children to see the fairies. Edward Gardner, who was Conan Doyle’s proxy and collaborator on the investigation, and who was known, according to Conan Doyle, for his “reputation for sanity and character” (23), worries that the window of opportunity afforded by the girls’ abilities may be closing as it is just a matter of time before one of the girls “will ‘fall in love’ and then–hey presto!!” (25). Conan Doyle himself thought that perhaps the girls’ powers of perception would have flagged in the three years between the taking of the first photos and Gardner’s visit to them in Yorkshire, because “I was well aware that the processes of puberty are often fatal to psychic power.”

Another presupposition that seems to have blinded Conan Doyle and Gardner to the possibility of a hoax was that the girls’ artisan class precluded them from designing elaborate photographic hoaxes involving double exposures and so on. But they were not expecting something so staggeringly simple as paper dolls on a stick. Conan Doyle opens the first chapter, “The series of incidents set forth in this little volume represent either the most elaborate and ingenious hoax ever played upon the public, or else the constitute an event in human history which may in the future appear to have been epoch-making in its character” (13).

I think that most interesting for science enthusiasts is how Conan Doyle was sensible of the need to put the existence of these little creatures in a modern scientific context. Very few people had ever seen fairies while awake, and most of Conan Doyle’d experiencers claim to have been especially psychic. This worked well for Conan Doyle, who was above all a committed Spiritualist and had a great interest in seeing the claimed abilities of these sensitive people (and thereby proof of the afterlife) proved with photographic evidence. He makes a move familiar in modern new age circles of saying that perhaps the critters existed in another frequency and that perceiving them was a matter of tuning. Perhaps, he thought, some sort of fairy detecting goggles would be developed that would allow regular people to perceive fairyland.

There is nothing, strictly speaking, preventing little winged people living in your garden other than the course that evolution happens to have taken. Well, that and house cats. Nonetheless, Conan Doyle and his correspondents spend a surprising amount of time talking about how they can reconcile the existence of these little creatures with evolution. The solution is that the fairy is descended from butterflies, while the gnome “has more of the moth.” They even attempt to sketch out the biogeography of fairy folk and other ethereal critters by analyzing masses of anecdotes from around the world.

Throughout the book, fairies seem to embody a close relationship with nature, one buoyed by happiness, music, and a carefree idyllic existence. According to Gardner, “For the most part, amid the busy commercialism of modern times, the fact of [fairies’] existence has faded to a shadow, and a most delightful and charming field of nature study has too long been veiled. In this twentieth century there is promise of the world stepping out of some of its darker shadows.” We can’t avoid the immediate context of this statement, as the previous decade had seen mankind perfect mass death on the battlefields of Europe, a conflict that took Conan Doyle’s son. As the industrial engines that had powered commercialism turned to manufacturing corpses on unfathomable scales, perhaps the escapism and innocence of childhood visions seemed overpoweringly attractive to these spiritual seekers. We may be certain that the surge in interest in spiritualism during and after WWI was related to the loss of a generation of European youth in much the same way spiritualism prospered in the wake of the American Civil War. A harmonious and joyous return to nature, which just happened to confirm the powers of those who could communicate with that lost generation, was perhaps seen as restorative to a crippled Europe.

An excellent review of some of the issues raised by the Cottingley incident can be found in Carole Silver’s study, “On the Origin of Fairies: Victorians, Romanticism, and Folk Belief.”

This entry was posted on Tuesday, February 4th, 2014 at 6:49 pm and is filed under humanities. You can follow any responses to this entry through the RSS 2.0 feed. You can leave a response, or trackback from your own site.

4 Responses to Sir Arthur Conan Doyle and the Cottingley Fairies