Apparently, someone thinks that they are the only person allowed to have a public opinion about Burzynski in a moving picture, as false takedown order attributed by Google to Burzynski movie director Eric Merola’s production company has been issued against c0nc0rdance, who posted a very good video about the Clinic in February. Whoever did this, well, they done somethin’ ornery.

The thing is that c0nc0rdance didn’t use any footage from Merola’s stinky toilet movie, possibly because it makes all critical thinkers feel sticky and dirty.

This is intolerable. The video remains down on youtube, but a kind person has mirrored the video, and it is now spreading around the Internet. Well done! Here’s my part to fight bullying:

If it’s true, it is actually starting to become a thing with Merola. Merola once tried to have me kicked off of facebook by encouraging people to lie about me to admins, saying that I was directing hate speech against sick people. Really. He did that. 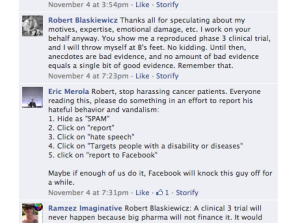 You will remember that he is also the dude who contacted my employer about articles I had written and statements I had made, promised my employer that I would feature heavily in his shitty sequel, and then did not name me or show my face. It’s being a bully. It’s wrong. And every time he calls us slippery or dirty, I marvel at such a minimal level of self-awareness.

Lastly, he reportedly told an audience who had been subjected to his new flick that the reason people like me were not getting sued was because we’d make a big stink online and try to hide behind our “B.S. free speech.” This is perhaps the only thing he has been right about in public. Except for the BS part. That’s real, and you better realize it, kiddo.

This entry was posted on Thursday, April 18th, 2013 at 11:58 pm and is filed under Uncategorized. You can follow any responses to this entry through the RSS 2.0 feed. You can leave a response, or trackback from your own site.