CBS fails to fulfill the promise of broadcasting

Last week, I was in New York City, rocking the NECSS groove, and I made a point to go see one of my favorite murals, Barry Faulkner’s 1933 “Intelligence Awakens Mankind,” which adorns the centerpiece of Rockefeller Center, the old RCA (now GE) Building.

It is a mural that expresses optimism about the dawning age of mass communication (it was the RCA Building…get it?). In the center, Intelligence, personified as a woman, sends out golden beams, or “thought”, via the Spoken Word and Written Word:

Radio waves, personified as angels, speed through the air carrying messages about fields such as “Philosophy,” “Biology,” and “Hygiene.” 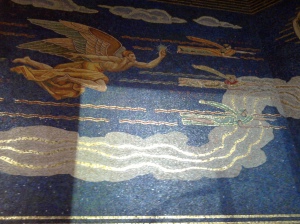 The information from the various fields of knowledge form a sort of force field, a protective barrier, if you will, around citizens: 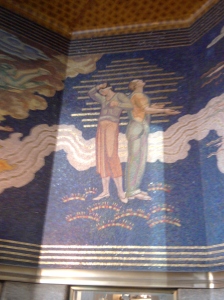 Now that they people are protected, demons like “Ignorance” and “Fear” can’t reach them, and they explode into flames: 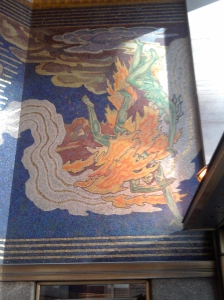 This, then, is the ideal that workers at NBC (who know occupy the old RCA Building) encounter every morning when they arrive at work.

No matter what NBC champions, enlightening and protecting people through knowledge, however, is simply not what CBS stands for.

Elyse Anders recently started a petition to ask CBS Outdoor to take down a highly deceptive advertisement on the JumboTron on 42nd street in Times Square that suggests vaccines are somehow risky. The man paying for the ad, Joe Mercola, is as far I can tell the worst self-described medical expert ever to not leave a roll of gauze in a patient.

How bad is Mercola? So bad that the FDA sent him a letter demanding that he stop making illegal claims. As far as I can tell, he’s not getting better at what he does. Stephen Barrett of quackwatch.com has found that Mercola’s long history of fake medicine includes declarations that fluoride is unsafe. He opposes mammograms and amalgam fillings. Joe Mercola is a public health menace, and CBS is his willing and informed business partner.

CBS is now allowing this crank to put out misleading information that hurts children and the immunocompromised. CBS, in a real sense, is promoting things that only hurt its audience.

And they have not even responded to the torrent of letters protesting this filthy deal.

Writing letters (including a protest by the American Academy of Pediatricians) seems not to have an effect on CBS’s practices, so it’s time let the public know what CBS is doing.

Tweet @CBSOutdoor and @CBSTweet with the hashtag #VaxCBS to tell them how you feel about them running this ad. Maybe #justinbieber while you’re at it.

You might also write a letter to the relevant CBS executives:

I appreciate it, folks.

This entry was posted on Thursday, April 14th, 2011 at 8:38 pm and is filed under conspiracy theory, mass media, science, science writing/reporting. You can follow any responses to this entry through the RSS 2.0 feed. You can leave a response, or trackback from your own site.

8 Responses to CBS fails to fulfill the promise of broadcasting