Medievalists tend to go a bit twitchy when we hear the term “the Dark Ages.” Frankly, “Middle Ages” isn’t great either–a whole time period defined for eternity as “the boring bit between those two nifty eras, the Classical Age and the Renaissance.” It’s as if it was just a centuries-long place holder between great flowerings of culture. The “Dark Ages” is worse still, suggesting that the whole period (whether the term is used to refer to the entire medieval period or only the early Middle Ages) was dreary, dreadful and intellectually and culturally bereft. Many medievalists avoid the term and prefer terms such as “the early Middle Ages” and “the High Middle Ages.” Fortunately, there is no middle Middle Ages.

As I have mentioned previously, I have been reading Holy Blood, Holy Grail. As a result, I have been almost entirely drained of the will to live. Occasionally, I will read a sentence which almost makes sense, but generally the authors snatch nonsense from the jaws of sense. A case in point: at the beginning of their discussion of the Merovingian dynasty, they note that this was “probably the most impenetrable period of what are now called the Dark Ages. But the Dark Ages, we discovered, had not been truly dark.” Aha! I thought, at least they have the sense to realize that characterizations of the early Middle Ages are unfair and inaccurate. “On the contrary,” they continue, “it quickly became apparent to us that somebody had deliberately obscured them” (234).

Wait, what? There was a conspiracy against the Dark Ages? I knew it! I’ll bet it was those filthy, stinking Renaissancers (and really, they were just as unwashed and smelly as medieval folk). Probably it was originally called the Bright, Shiny Happy Ages until those fops in ruffs showed up and “deliberately obscured them.” Oh, and by the way, the Black Death? Really just an outbreak of sniffles. 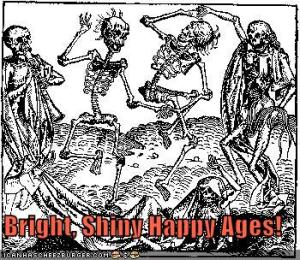 This entry was posted on Tuesday, February 1st, 2011 at 11:43 pm and is filed under history, humanities. You can follow any responses to this entry through the RSS 2.0 feed. You can leave a response, or trackback from your own site.

3 Responses to The Dark Ages Conspiracy